In a class last fall with Laverne Waddington of the wonderful Backstrap Weaving blog, I learned to use a temporary picking cross. I will nevah, evah, do anything else for manually picking patterns on a base of horizontal bars. I know that isn’t a technical name, but it’s like the basic pick-up described by Anne Dixon in her book, The Weaver’s Inkle Pattern Directory, where you warp your two colors in alternating horizontal bands, and then weave in the two basic up-down plain sheds, picking threads up as needed to create a pattern. It’s also the base structure that is in Laverne’s book, Complementary-Warp Pick-Up. It’s also the same basic structure from Heather Torgenrud’s book, Norwegian Pick-Up Bandweaving. She calls this structure “Type 1 Pickup.” In fact, the band below uses a couple of patterns from that book.

Anyway, y’all. This is a temporary picking cross I used on a band a few weeks back on my inkle loom. I did have to loosen the tension a little bit to get my fingers in there comfortably, but I am never looking back. 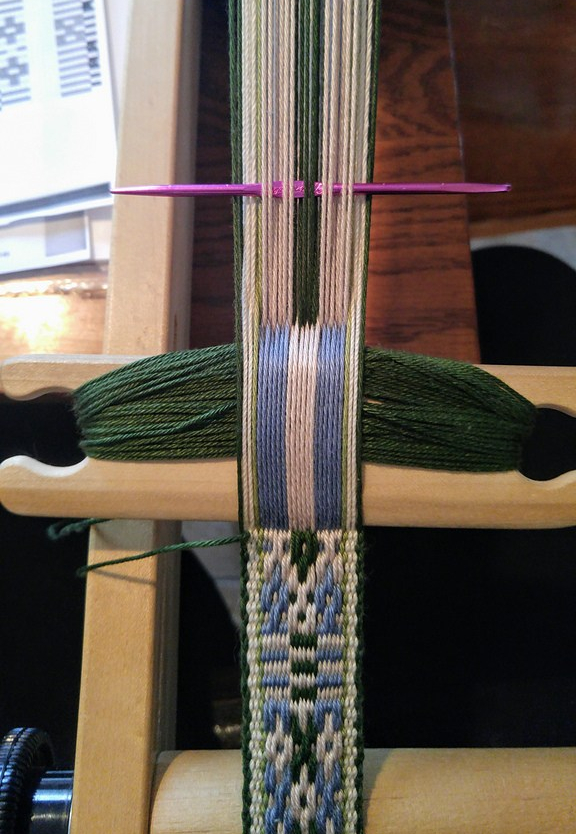 I’ve already picked the pattern threads and they are being held on the purple thing, so you can’t see the complete cross held on my fingers. You can still see it, mostly, though, just above the shuttle